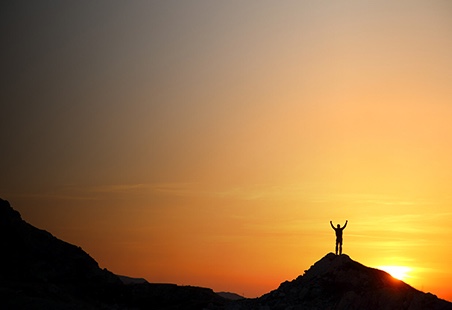 “Everyday is a bank account, and time is our currency. No one is rich, no one is poor, we’ve got 24 hours each.” ― Christopher Rice

Richard Branson is one of the richest people on the planet.

He’s a prolific entrepreneur who’s founded several multimillion companies, many of which are under the Virgin group.

According to Forbes, he’s worth $5.1 billion, easily making him a shining example of financial success.

But as wealthy as he is, Richard says that money has never been his motivation.

That’s pretty ironic, considering that everything he’s done has resulted in being incredibly rich.

In an interview, he said that his real passion is “creating things I can be proud of.”

Richard believes that by making THAT your focus, people will like what you made – and you’ll end up getting rich anyway.

What he said resonated with me. It seems that most people are only concerned (or even obsessed) with purely making money, and nothing more.

When you see money as the be-all, end-all of everything you do, it can backfire and keep you poor.

In my experience, having an unbalanced attitude towards money might earn you some of it now…

…but it won’t help you KEEP it in the long run.

To sustain long-term wealth, rich people live by other values that go beyond making money for the sake of it.

Here are the 7 biggest reasons why rich people and poor people stay the way they are:

#1: Rich people know their HOWs and WHYs, poor people are wishy-washy about getting wealthy

This is one of the biggest problems I see with a lot of folks.

…but it’s just empty words and not a lot of follow through.

Intention is good, but taking action makes the REAL difference.

And a lot of people end up getting stuck in the “wanting” stage because they don’t have a crystal clear idea of two important things:

Having a sense of direction and purpose are crucial to making anything happen.

Without it, you’ll be stumbling aimlessly through life, then complain about the negative balance in your bank account.

Here’s a quick assignment you can do: make a mission-vision statement.

Do a little reflection and think about where you want to go in life. Consider the principles and values you live by, and how they fit into your overall plans.

Visualize the future you want, then get as detailed as you can about it.

Maybe you’re dreaming about being a world-class chef running a Michelin-starred restaurant. Or you see yourself putting up an animal shelter for abused and abandoned pets.

Think about what a typical day in that life would be like.

Imagine the kind of value you’d be adding to people’s lives, and the kind of positive impact you’d make in your community.

Then ask yourself, “What role does WEALTH play in realizing my big goals in life?”

Once you’ve got your compass pointing to your “True North”, you’ll have a much clearer set of goals to shoot for – and get excited about making money.

And best part is that it’ll be easier to break down those goals into smaller, more actionable steps.

That will make your wealth-building mission a lot less intimidating. This is definitely a good thing – fear is what stops most people from fully committing to their goals.

I’m not judging anyone for avoiding their problems, but it certainly won’t help them get rich.

Procrastination, denial and blame are the top three symptoms among people who stay poor all their lives.

They put off working on a solution to their problems…

…deny the problem exists in the first place…

…and to top it off, they take zero responsibility, blaming everyone and everything.

Meanwhile, wealth-minded folks eat adversity for breakfast and dive headfirst into the uncomfortable.

They know it’s not always a pleasant thing to do, but they embrace it anyway.

Rich people treat challenges as a test of character. They get to work by figuring out how to improve themselves, or find out what they’re doing wrong.

In most cases, it’s a little bit of having to do both.

And after they get over a particularly pesky hurdle, they’re all the wiser and stronger for it.

Every payday, it’s the same cycle for poor folks.

Once the money comes in, they go out and buy the latest gadget they’ve had their eye on for the last couple of months.

After scratching that itch, they get around to paying the bills and other necessities.

Then they spend whatever they’ve got left on other stuff that doesn’t bring any value or help them make more money.

If you want to be rich – and STAY that way – you need to get your priorities straight.

Cover your living expenses first, then reinvest a set portion of your income on something that offers long-term value.

This could be anything that allows you to grow in some way, like learning a new skill or upgrading an existing skill set.

Or it could be an asset to help you build more wealth later on.

Trust me, it’s a good idea to cultivate the discipline of funneling a percentage of your money into something productive.

This one habit will keep your entire paycheck from getting sucked into a black hole of spending.

I know it’s not exactly thrilling to have so little left over after doing this, but it will pay off in the long run.

Soon, you’ll be in a better position to earn more money, and eventually you’ll have more left over to spend on the non-essentials (a.k.a. the FUN stuff).

#4: Poor people get their success BEFORE they’ve earned it, rich people play the LONG GAME

The truth is that you don’t have to be a financial wizard to earn your first million.

…it doesn’t mean you can’t learn the skills and mindset to be THAT person in the future.

And the main problem is that poor people have a hardwired belief that they’re  “no good with money” or aren’t  “good with money stuff.”

This sets them up for failure. They’re depriving themselves of the opportunity to LEARN how to get rich.

So, their lack of money management skills leads them to making terrible decisions. The most common one is falling into credit card debt.

However, that’s not to say taking out a loan for something useful in your life is a bad thing.

But in most cases, people end up broke because they use a credit card for things that don’t add value to their lives (see #3).

As much as possible, anything that you don’t absolutely need right at this moment should be paid for in cash.

If it’s not an asset to help you make more money, hold off on spending until you’ve actually worked for the money to pay for it.

Your well-being is a basic but incredibly VITAL part of generating wealth – and this is one investment you can’t take for granted.

Poor people don’t think they can afford to keep themselves healthy, but it’s actually the opposite.

Don’t fall under the notion that you can just rely on good genetics or plain luck to avoid getting sick. If you make that gamble, you risk getting cleaned out if something does happen.

Of course, that’s not something I wish upon anyone. But remember, all it takes is one serious illness to cripple you financially (or physically).

So you should start taking steps to invest in your health today, even if you’re feeling well at the moment.

Hit the gym (or find free alternatives if membership fees are an issue), get regular check-ups, eat healthier (not easy I know, but still worth it) and get enough sleep.

Doing this will require time, discipline and money (but not too much if you do your homework).

But as far as the big picture is concerned, the long-term benefits outweigh the short-term inconvenience.

Having more energy and being able to think clearly will BOOST your ability to make money.

If you treat your mind and body with the respect and care that it deserves, you’ll be unstoppable.

Ever heard of the expression, “Misery loves company”?

It looks like this isn’t just some arbitrary saying, as far recent research goes.

A study from the University of Arizona found that people have a tendency to seek others on the same wavelength.  Their findings also show that a person’s mood isn’t really as “contagious” one might think.

After studying hundreds of roommates and romantic couples, they discovered that a person’s default emotional state – whether positive or negative…

…doesn’t have much to do with the changes in mood of the other people around them.

What this means is that you probably won’t be seeking out someone different, nor changing how they think or feel.

You’re more likely to hang out with someone you have a lot in common with in the first place.

This is why poor people stay poor – they don’t put a lot of thought into the company they keep.

They just “go with the flow”, and that keeps them stuck in a poverty mindset – especially if their friends resent other people’s success, or enjoy putting them down.

But there’s a flip side to that study:

You can consciously decide which people to hang out with, rather than doing it instinctively.

That way, you can manually set the “emotional thermostat” to operate on.

Rich people do this all the time. They seek out others who either inspire them, teach them something new, or both.

Building on the last point, rich people don’t waste time trying to tear others down. They don’t live for finding something wrong with their family, friends or colleagues.

And they don’t focus on everything that’s wrong with the world, either.

Sure, wealth-minded folks are aware they don’t live in a perfect world – but they’d rather not dwell on that.

Instead, they get busy trying to add value to the world. And on top of that, they’re GRATEFUL for every good thing that comes their way.

By recognizing what they have now, rich people reach an even higher level of energy.

And this allows them to make even MORE money in the future.

The next time you get to enjoy something that others don’t (e.g. food, shelter, your partner, having a job), acknowledge that moment in your mind.

Chase that wonderful feeling as long as you can, and allow it to fill you with positive energy.

And if you’re up to it, take it one step further by recognizing someone who’s got it better than you.

It doesn’t matter if it’s your neighbor with a nice car or a co-worker who got promoted. Be happy for them and let them know about it.

Give them a quick “Hey, sweet ride!” or “Congrats, you deserve it!”

Trust me, this will do wonders for your soul.

When you come from a place of gratitude and appreciation, everything else will follow.

And it will ultimately put you on the path to success.

Speaking of which, there’s one more factor that separates successful people from mediocre people.

To everyone else, it might seem like rich people have a natural “magnet” that attracts incredible amounts of wealth and success.

Endless opportunities just seem to fall into their lap – and the money just seems to keep pouring in.

But the REAL difference between people who generate massive wealth and those who don’t comes down to ONE single quality.

For years, psychologists couldn’t put their finger on this elusive X factor…

They’ve discovered something called “Personal Magnetism”, and it’s the key to unlocking every opportunity for you to succeed beyond your expectations.

And the good news is that it’s ridiculously easy to have this quality and USE it.

It all begins by watching the video below: