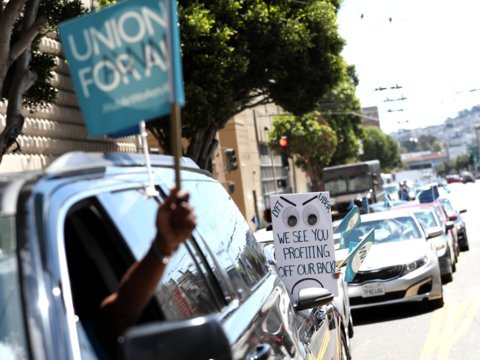 Rideshare drivers wave flags as they line up their cars during a protest outside of Uber headquarters on August 27, 2019 in San Francisco, California.

Dozens of Uber and Lyft drivers staged a protest outside of Uber headquarters in support of California assembly bill 5 and to organize a union for rideshare drivers.

Uber has offered a $21 minimum wage for drivers as it fights against a California bill that could devastate its business.

But there’s a catch: the wage floor would only apply while drivers are on a ride. Studies show this to be only about 60% of drivers’ time.

Origen: Uber has proposed a new minimum wage for drivers after years of protests, but it comes with a catch